Showing posts from June, 2015
Show All

The second meeting of the UK Archivematica group 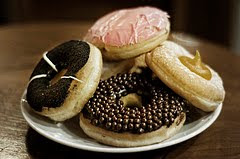 Unaffected by the threatened rail strike and predicted thundery showers, the 2 nd UK Archivematica meeting went ahead at the Tate Britain in London last week. This second meeting saw an increase in attendees with 22 individuals representing 15 different organisations in the UK and beyond (a representative from the Zuse Institute in Berlin joined us). It is great to see a growing awareness and engagement with Archivematica in the UK. The meeting provided another valuable chance to catch up, compare notes and talk about some of the substantial progress that has been made since our last meeting in January. Updates were given by Marco Klindt from the Zuse Institute on their plans for an infrastructure for digital preservation as a service and Chris Grygeil from the University of Leeds on their latest thinking on a workflow for digital archiving. Marco plans to use Archivematica as an ingest tool before pushing the data to Fedora for access. The Zuse Institute have been working with Artefa
1 comment
Read more
More posts