By Anonymous - December 04, 2017
Last Thursday was International Digital Preservation Day and I think I needed the weekend to recover.

It was pretty intense...

Amazing to see what a fabulous international community there is out there working on the same sorts of problems as me!

Amazing to see quite what a lot of noise we can make if we all talk at once! 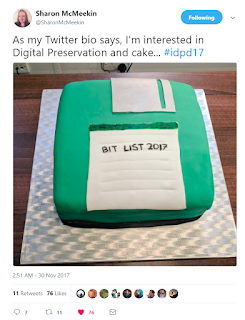 Amazing to see such a huge amount of advocacy and awareness raising going on in such a small space of time!

International Digital Preservation Day was crazy but now I have had a bit more time to reflect, catch up...and of course read a selection of the many blog posts and tweets that were posted.

So here are some of my selected highlights:

Of course the highlights have to include the cakes and biscuits including those produced by Rachel MacGregor and Sharon McMeekin. Turning the problems that we face into something edible helps does seem to make our challenges easier to digest!

A few quizzes and puzzles were posed on the day via social media - a great way to engage the wider world and have a bit of fun in the process.

There was a great quiz from the Parliamentary Archives (the answers are now available here) and a digital preservation pop quiz from Ed Pinsent of CoSector which started here. Also for those hexadecimal geeks out there, a puzzle from the DP0C Fellows at Oxford and Cambridge which came just at the point that I was firing up a hexadecimal viewer as it happens!

In a blog post called Name that item in...? Kirsty Chatwin-Lee at Edinburgh University encourages the digital preservation community to help her to identify a mysterious large metal disk found in their early computing collections. Follow the link to the blog to see a picture - I'm sure someone out there can help!

There were lots of big announcements on the day too. IDPD just kept on giving! 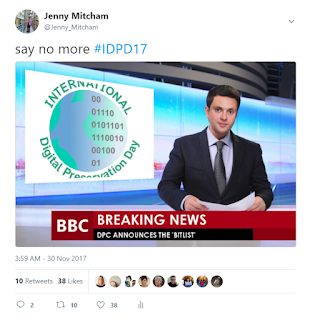 Of course the 'Bit List' (a list of digitally endangered species) was announced and I was able to watch this live. Kevin Ashley from the Digital Curation Coalition discusses this in a blog post. It was interesting to finally see what was on the list (and then think further about how we can use this for further advocacy and awareness raising).

I celebrated this fact with some Fake News but to be fair, William Kilbride had already been on the BBC World Service the previous evening talking about just this so it wasn't too far from the truth!

New versions of JHOVE and VeraPDF were released as well as a new PRONOM release.  A digital preservation policy for Wales was announced and a new course on file migration was launched by CoSector at the University of London. Two new members also joined the Digital Preservation Coalition - and what a great day to join! 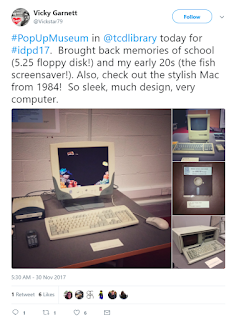 Some institutions did a roadshow or a pop up museum in order to spread the message about digital preservation more widely. This included the revival of the 'fish screensaver' at Trinity College Dublin and a pop up computer museum at the British Geological Survey.

Digital Preservation at Oxford and Cambridge blogged about their portable digital preservation roadshow kit. I for one found this a particularly helpful resource - perhaps I will manage to do something similar myself next IDPD!

A day in the life

Several institutions chose to mark the occasion by blogging or tweeting about the details of their day. This gives an insight into what we DP folks actually do all day and can be really useful being that the processes behind digital preservation work are often less tangible and understandable than those used for physical archives!

I particularly enjoyed the nostalgia of following ex colleagues at the Archaeology Data Service for the day (including references to those much loved checklists!) and hearing from  Artefactual Systems about the testing, breaking and fixing of Archivematica that was going on behind the scenes.

The Danish National Archives blogged about 'a day in the life' and I was particularly interested to hear about the life-cycle perspective they have as new software is introduced, assessed and approved.

Plans are my reality from Yvonne Tunnat of the ZBW Leibniz Information Centre for Economics was of particular interest to me as it demonstrates just how hard the preservation tasks can be. I like it when people are upfront and honest about the limitations of the tools or the imperfections of the processes they are using. We all need to share more of this!

In Sustaining the software that preserves access to web archives, Andy Jackson from the British Library tells the story of an attempt to maintain a community of practice around open source software over time and shares some of the lessons learned - essential reading for any of us that care about collaborating to sustain open source.

Kirsty Chatwin-Lee from Edinburgh University invites us to head back to 1985 with her as she describes their Kryoflux-athon challenge for the day. What a fabulous way to spend the day!

Cees Hof from DANS in the Netherlands talks about the loss of digital data related to rare or threatened species in The threat of double extinction, Sarah Mason from Oxford University uses the recent example of the shutdown of DCist to discuss institutional risk, José Borbinha from Lisbon University, Portugal talks about his own experiences of digital preservation disaster and Neil Beagrie from Charles Beagrie Ltd highlights the costs of inaction.

Other blogs looked at the bigger picture

Preservation as a present by Barbara Sierman from the National Library of the Netherlands is a forward thinking piece about how we could communicate and plan better in order to move forward.

Shira Peltzman from the University of California, Los Angeles tries to understand some of the results of the 2017 NDSA Staffing Survey in It's difficult to solve a problem if you don't know what's wrong.

David Minor from the University of San Diego Library, provides his thoughts on What we’ve done well, and some things we still need to figure out.

I enjoyed reading a post from Euan Cochrane from Yale University Library on The Emergence of “Digital Patinas”. A really interesting piece... and who doesn't like to be reminded of the friendly and helpful Word 97 paperclip?

In Towards a philosophy of digital preservation, Stacey Erdman from Beloit College, Wisconsin USA asks whether archivists are born or made and discusses her own 'archivist "gene"'.


So much going on and there were so many other excellent contributions that I missed.

I'll end with a tweet from Euan Cochrane which I thought nicely summed up what International Digital Preservation Day is all about and of course the day was also concluded by William Kilbride of the DPC with a suitably inspirational blog post. 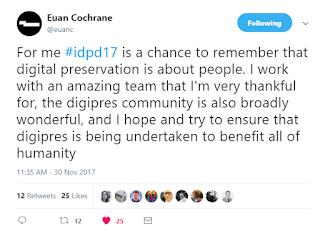 Congratulations to the Digital Preservation Coalition for organising the day and to the whole digital preservation community for making such a lot of noise!