What shall I do for International Digital Preservation Day? 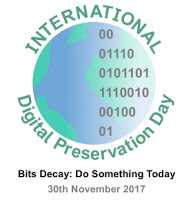 I have been thinking about this question for a few months now and have only recently come up with a solution.

I wanted to do something big on International Digital Preservation Day. Unfortunately other priorities have limited the amount of time available and I am doing something a bit more low key. To take a positive from a negative I would like to suggest that as with digital preservation more generally, it is better to just do something rather than wait for the perfect solution to come along!

I am sometimes aware that I spend a lot of time in my own echo chamber - for example talking on Twitter and through this blog to other folks who also work in digital preservation. Though this is undoubtedly a useful two-way conversation, for International Digital Preservation Day I wanted to target some new audiences.

The audience for the Borthwick blog is a bit different to my usual readership. It is more likely to be read by users of our services at the Borthwick Institute and those who donate or deposit with us, perhaps also by staff working in other archives in the UK and beyond. Perfect for what I had planned.

In response to the tagline of International Digital Preservation Day ‘Bits Decay: Do Something Today’ I wanted to encourage as many people as possible to ‘Do Something’. This shouldn’t be just limited to us digital preservation folks, but to anyone anywhere who uses a computer to create or manage data.

This is why I decided to focus on Personal Digital Archiving. The blog post is called “Save your digital stuff!” (credit to the DPC Technology Watch Report on Personal Digital Archiving for this inspiring title - it was noted that at a briefing day hosted by the Digital Preservation Coalition (DPC) in April 2015, one of the speakers suggested that the term ‘personal digital archiving’ be replaced by the more urgent exhortation, ‘Save your digital stuff!’).

The blog post aimed to highlight the fragility of digital resources and then give a few tips on how to protect them. Nothing too complicated or technical, but hopefully just enough to raise awareness and perhaps encourage engagement. Not wishing to replicate all the great work that has already been done on Personal Digital Archiving, by the Library of Congress, the Paradigm project and others I decided to focus on just a few simple pieces of advice and then link out to other resources.

At the end of the post I encourage people to share information about any actions they have taken to protect their own digital legacies (of course using the #IDPD17 hashtag). If I inspire just one person to take action I'll consider it a win!

I'm also doing a 'Digital Preservation Takeover' of the Borthwick twitter account @UoYBorthwick. I lined up a series of 'fascinating facts' about the digital archives we hold here at the Borthwick and tweeted them over the course of the day.

OK - admittedly they won't be fascinating to everyone, but if nothing else it helps us to move further away from the notion that an archive is where you go to look at very old documents!

...and of course I now have a whole year to plan for International Digital Preservation Day 2018 so perhaps I'll be able to do something bigger and better?! I'm certainly feeling inspired by the range of activities going on across the globe today.