The mysterious case of the changed last modified dates

Like any good story it has a beginning (the problem is discovered, the digital archive is temporarily thrown into chaos), a middle (attempts are made to solve the mystery and make things better, several different avenues are explored) and an end (the digital preservation community come to my aid).

This story has a happy ending (hooray) but also includes some food for thought (all the best stories do) and as always I'd be very pleased to hear what you think.

I have probably mentioned before that I don't have a full digital archive in place just yet. While I work towards a bigger and better solution, I have a set of temporary procedures in place to ingest digital archives on to what is effectively a piece of locked down university filestore. The procedures and workflows are both 'better than nothing' and 'good enough' as a temporary measure and actually appear to take us pretty much up to Level 2 of the NDSA Levels of Preservation (and beyond in some places).

One of the ways I ensure that all is well in the little bit of filestore that I call 'The Digital Archive' is to run frequent integrity checks over the data, using a free checksum utility. Checksums (effectively unique digital fingerprints) for each file in the digital archive are created when content is ingested and these are checked periodically to ensure that nothing has changed. IT keep back-ups of the filestore for a period of three months, so as long as this integrity checking happens within this three month period (in reality I actually do this 3 or 4 times a month) then problems can be rectified and digital preservation nirvana can be seamlessly restored.

Checksum checking is normally quite dull. Thankfully it is an automated process that runs in the background and I can just get on with my work and cheer when I get a notification that tells me all is well. Generally all is well, it is very rare that any errors are highlighted - when that happens I blog about it!

I have perhaps naively believed for some time that I'm doing everything I need to do to keep those files safe and unchanged because if the checksum is the same then all is well, however this month I encountered a problem...

I've been doing some tidying of the digital archive structure and alongside this have been gathering a bit of data about the archives, specifically looking at things like file formats, number of unidentified files and last modified dates.

Whilst doing this I noticed that one of the archives that I had received in 2013 contained 26 files with a last modified date of 18th January 2017 at 09:53. How could this be so if I have been looking after these files carefully and the checksums are the same as they were when the files were deposited?

The 26 files were all EML files - email messages exported from Microsoft Outlook. These were the only EML files within the whole digital archive. The files weren't all in the same directory and other files sitting in those directories retained their original last modified dates.

So this was all a bit strange...and worrying too. Am I doing my job properly? Is this something I should be bringing to the supportive environment of the DPC's Fail Club?

The last modified dates of files are important to us as digital archivists. This is part of the metadata that comes with a file. It tells us something about the file. If we lose this date are we losing a little piece of the authentic digital object that we are trying to preserve?

Instead of beating myself up about it I wanted to do three things:

So how could it have happened? Has someone tampered with these 26 files? Perhaps unlikely considering they all have the exact same date/time stamp which to me suggests a more automated process. Also, the digital archive isn't widely accessible. Quite deliberately it is only really me (and the filestore administrators) who have access.
I asked IT whether they could explain it. Had some process been carried out across all filestores that involved EML files specifically? They couldn't think of a reason why this may have occurred. They also confirmed my suspicions that we have no backups of the files with the original last modified dates.
I spoke to a digital forensics expert from the Computer Science department and he said he could analyse the files for me and see if he could work out what had acted on them and also suggest a methodology of restoring the dates.
I have a record of the last modified dates of these 26 files when they arrived - the checksum tool that I use writes the last modified date to the hash file it creates. I wondered whether manually changing the last modified dates back to what they were originally was the right thing to do or whether I should just accept and record the change.
...but I decided to sit on it until I understood the problem better.

I threw the question out to the digital preservation community on Twitter and as usual I was not disappointed!

In fact, along with a whole load of discussion and debate, Andy Jackson was able to track down what appears to be the cause of the problem. 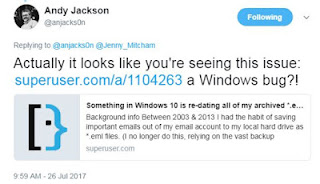 He very helpfully pointed me to a thread on StackExchange which described the issue I was seeing.

It was a great comfort to discover that the cause of this problem was apparently a bug and not something more sinister. It appears I am not alone!

So I now I think I know what caused the problem but questions remain around how to catch issues like this more quickly (not six months after it has happened) and what to do with the files themselves.
IT have mentioned to me that an OS upgrade may provide us with better auditing support on the filestore. Being able to view reports on changes made to digital objects within the digital archive would be potentially very useful (though perhaps even that wouldn't have picked up this Windows bug?). I'm also exploring whether I can make particular directories read only and whether that would stop issues such as this occurring in the future.
If anyone knows of any other tools that can help, please let me know.
The other decision to make is what to do with the files themselves. Should I try and fix them? More interesting debate on Twitter on this topic and even on the value of these dates in the first place. If we can fudge them then so can others - they may have already been fudged before they got to the digital archive - in which case, how much value do they really have?

So should we try and fix last modified dates or should we focus our attention on capturing and storing them within the metadata. The later may be a more sustainable solution in the longer term, given their slightly slippery nature!
I know there are lots of people interested in this topic - just see this recent blog post by Sarah Mason and in particular the comments - When was that?: Maintaining or changing ‘created’ and ‘last modified’ dates. It is great that we are talking about real nuts and bolts of digital preservation and that there are so many people willing to share their thoughts with the community.

...and perhaps if you have EML files in your digital archive you should check them too!