What have we got in our digital archive?

By Anonymous - February 13, 2017
Do other digital archivists find that the work of a digital archivist rarely involves doing hands on stuff with digital archives? When you have to think about establishing your infrastructure, writing policies and plans and attending meetings it leaves little time for activities at the coal face. This makes it all the more satisfying when we do actually get the opportunity to work with our digital holdings.

In the past I've called for more open sharing of profiles of digital archive collections but I am aware that I had not yet done this for the contents of our born digital collections here at the Borthwick Institute for Archives. So here I try to redress that gap.

I ran DROID (v 6.1.5, signature file v 88, container signature 20160927) over the deposited files in our digital archive and have spent a couple of days crunching the results. Note that this just covers the original files as they have been given to us. It does not include administrative files that I have added, or dissemination or preservation versions of files that have subsequently been created.

I was keen to see:
...and also use these results to:
Digital data has been deposited with us since before I started at the Borthwick in 2012 and continues to be deposited with us today. We do not have huge quantities of digital archives here as yet (about 100GB) and digital deposits are still the exception rather than the norm. We will be looking to chase digital archives more proactively once we have a Archivematica in place and appropriate workflows established.
Last modified dates (as recorded by DROID) appear to range from 1984 to 2017 with a peak at 2008. This distribution is illustrated below. Note however, that this data is not always to be trusted (that could be another whole blog post in itself...). One thing that it is fair to say though is that the archive stretches back right to the early days of personal computers and up to the present day.


Here are some of the findings of this profiling exercise:

Files that were identified

So perhaps these are things I'll look into in a bit more detail if I have time in the future. 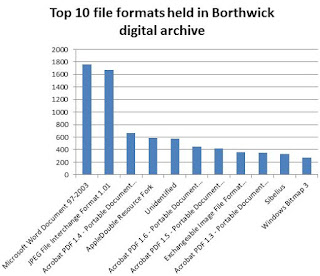 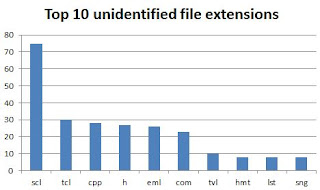 I'm really pleased to see that the vast majority of the files that we hold can be identified using current tools. This is a much better result than for our research data. Obviously there is still room for improvement so I hope to find some time to do further investigations and provide information to help extend PRONOM.
Other follow on work involves looking at system files that have been highlighted in this exercise. See for example the AppleDouble Resource Fork files that appear in the top ten identified formats. Also appearing quite high up (at number 12) were Thumbs.db files but perhaps that is the topic of another blog post. In the meantime I'd be really interested to hear from anyone who thinks that system files such as these should be retained.